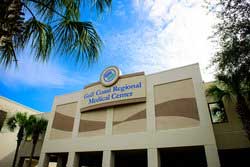 The idea for Gulf Coast Regional Medical Center was conceived out of a simple desire – to improve the quality of healthcare for the families in and surrounding Bay County, Florida. The idea began more than 40 years ago with two young Panama City physicians who had a dream.

In the early 1970s, there were three hospitals in Panama City: 100-bed Bay Memorial Hospital; 40-bed Lisenby Hospital; and 30-bed Adams Hospital. All three facilities were aging; there was a lack of specialized care; and none of the hospitals had emergency departments. Concerned about the quality of care their patients were receiving, the two young physicians took a bold risk. They decided to buy Lisenby Hospital and turn it into a high-quality medical center.

“Our true motivation was to improve medical care in Bay County,” said Dr. Tim Smith. “The facilities then were terrible. There were a limited number of specialists, very small intensive care services and surgeries that weren’t available. All three hospitals were archaic. I remember Dr. James Poyner and I were in his office one day, upset over some problem at Lisenby. That’s when he suggested we buy the hospital and run it like we thought it should be run.”

Smith and Poyner approached the hospital’s owner with their idea.

“We asked Dr. Lisenby what he would take for his hospital,” said Dr. Poyner. “And, he named a price that was out of our range. It was just too much for two young doctors to handle.”

Undeterred, Smith and Poyner convinced 19 other area physicians and local attorney Rowlett Bryant to join them in their venture. The group bought Lisenby Hospital in 1969 and immediately began making improvements, expanding the hospital to 50 rooms. It soon became apparent that more extensive expansion was necessary to accommodate the rapidly growing community. The group applied for a certificate of need for 100 beds. Rowlett Bryant assisted in the legal aspects of this endeavor.

“The Certificate of Need law had just been passed, and there were no forms for that process. We had to create our own forms,” said Bryant. “The state granted us a certificate of need for a 150-bed hospital, under the condition that we close Lisenby because it was outdated.”

The closing of Lisenby Hospital not only marked the end of an era it also marked the dawn of a new era in healthcare in Bay County. Gulf Coast Regional Medical Center was born.

After much deliberation on whether to rebuild on the present site or build on a new location, the group decided there was a bigger need for a hospital on the north side of town. They purchased 150 acres on 23rd St near Jenks Avenue. Architectural plans were drawn up, with each physician specialist having a say in the design of his department, and the group began looking for financing to build the new facility. There, a new problem arose.

“By then it was the 70s and all of a sudden the economy went south,” said Dr. Smith. “Interest rates hit 20%, and when you figure that on $9 million, which is what the hospital would cost. Some of the doctors decided it was just too big a nut to crack, and we went looking for other options.”

The best option, they decided, was to have a hospital management company purchase the project. Bryant contacted HCA (Healthcare Corporation of America) president Dr. Tommy Frist, Jr. and invited him to Panama City. Dr. Frist said he was impressed by the group’s determination to continue their plan despite the obstacles they faced.

“I was very impressed with the quality of doctors in the area. They were really interested in getting a quality medical center,” explained Frist.

A deal was negotiated and construction began in 1976. Gulf Coast Community Hospital opened its doors on January 3, 1977 as a state-of-the-art facility offering the most modern services and technology available. After nine long years of work and care, Smith, Poyner and the founding members saw their dream become a reality.

“There are two things I’ve done in my life that I am most proud of,” stated Poyner. “One is the instrumental role I played in immunizing Bay County against polio. The other is my influence in getting this hospital started.”